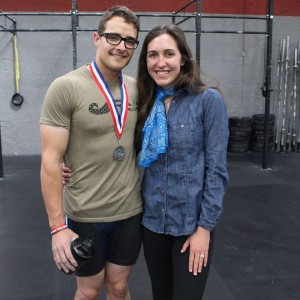 I qualified for the 2015 American Open yesterday! This has been my goal, not just for this year, but since I started competing in weightlifting. I still cannot believe that I did it. I feel like I’m still in shock. Honestly, it could not have went any better. However, I should turn back the clock a little to show just why I was so surprised that I met the qualifying total.

To say that my last couple months leading into this meet were below standard is an understatement. Just as an example, back at the end of June I hit a PR front squat of 150kg (it’s true, I have the video to prove it 😉 ).

Leading to the Rodger DeGarmo Memorial I was struggling with 135kg. Needless to say, I’ve lost a lot of leg strength. Also, as far as my competition lifts in training go, during my preparation for the Rocky Mountain State Games I was completing heavier lifts more frequently and more successfully. Now, compare that to the preparation for the DeGarmo Memorial where the highest I was able to work up to was a 95kg snatch and a 120kg clean and jerk (that’s right…’a,’ meaning 1 rep). And those were both completed on the Monday before the meet!

I guess this just shows that you can’t always base your projected performance on what you’ve been doing in training, which leads me to my next point…

As I just said, don’t worry if you’re not performing well in training. Sometimes you just have to go for it at the meet. Leave all of your missed attempts and crappy training days behind you. I mean, really, you should have seen some of my training sessions leading up to my qualifying performance; quite pitiful, actually. It was as if I had never done the movements in some of these sessions. My coach was not thrilled, nor was I.

This just goes to show that some lifters, including myself, are what is coined a “meet lifter,” where the lifter can perform at a much higher level than in training.

I wanted to touch on the week leading into the meet briefly because it was much different than I’ve prepared in the past. And, I’ll add, I will definitely always prepare this way for the rest of my competition experience. In the past I would push myself really hard from days 14-10 out from the meet (yes, we count backwards). This meet was different because I was just not completing successful lifts, so there was no reason to try and work heavier if I kept missing. Because of this, my intensity was lower than normal leading into the meet and my joints actually started feeling better. I should have mentioned earlier that the reason I lost so much leg strength is because my knee started bothering me badly; I stopped squatting for nearly a month.

I was able to start squatting again about a month out from the meet and may have gained back a little strength. Well, enough for what I needed, anyway 🙂

My point, though, is that my joints felt really good. I don’t know that I’ve felt that good in a meet in the past.

This meet was great. Paul Fleschler, who also happens to be my coach, does a great job running the meet and it went smoothly from what I could tell. I arrived at the venue in the morning about half an hour before my weigh-in. I weighed in at 75.8kg (I can never seem to get my cut right…probably because I’ve only ever had to cut weight twice 😀 ).

After weigh-ins I just hung around, ate, and rested. I like to usually lie down for awhile and just close my eyes, visualizing my lifts.

In the clean and jerk session I also had 6 attempts planned; I actually did 5: 60×3, 90×2, 100×2, 110×1, 116×1. My first attempt was 123kg. I had originally planned on opening with 120kg, but Paul suggested I open higher so that I had 2 chances to attempt what I needed to qualify for the American Open. I’m glad I had him there because that’s exactly how it played out. I made 123kg, then jumped to 130kg for my second attempt, which is the highest I’ve ever jumped in a competition between attempts. I made the clean, but missed the jerk because I ran our of air and was nearly passing out. I had to follow myself and took about 1:15 before going out for my third attempt, which was successful at 130kg.

I was nearly ready to take time away from weightlifting, as I was getting discouraged with how badly training was the past couple months. Now I’m newly revived and ready for what’s in store for the next couple months of training.

I’ll keep everyone updated as I prepare for the American Open!