What’s old becomes new again and everyone thinks they’ve invented some kind of new training technique or method. We see it all the time; a get-rich-quick scheme unravels before our eyes on a commercial, while the veteran strength coach to our right laughs aloud. He states, “we were doing that 20 years ago!”

There are some things, though, that are old and should stay at the forefront of our thought processes as strength coaches. Whether used for coaching or programming, these things are the basics that seem to work with no doubt and should always be at our disposal. I’m talking about those little pebbles of knowledge that every strength coach should know and be able to pull out of the memory banks at the drop of a dime.

This is a new little series I’ll be writing on and we’ll begin with power development.

The Basics of Power (Force & Velocity)

Where to start? We know that force (F) is the product mass (M) and acceleration (A), which is the rate at which the velocity of an object changes in a certain time frame (F=MxA). Or, put another way, A = F/M. If we train with a high mass and low acceleration, the force is very high, but the power development is very low. If we train with a high rate of movement (higher acceleration), the force drops because of less weight being moved, but the power increases.

There are certain points, depending on the movement being employed, where  the external force (think weight on a bar) is too low to create any training stimulus (e.g., for some movements, you may have to increase the weight a little more). On the other end, you can load too much to the point that the movement is so slow there is barely any power development within that movement (e.g., max lifts or, to an even larger extent, missed lifts). 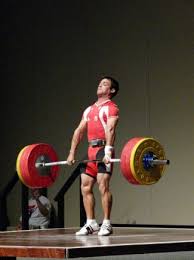 As many of you know, I’m a little biased towards Weightlifting movements. The Snatch, Clean, Jerk, and all their derivatives are great for total-body power development. Typical training intensities range from 70-85% 1RM for Weightlifters. However, athletes can benefit from intensities that fall outside of this range. One recommendation, especially for athletes new to the full movements, is to use intensities of 50-70%. Now, if you decide to use a variation such as a snatch pull from above the knee, you may choose to go heavier; 1) because there is slightly less technique involved, compared to the full lift and 2) because the lift does not have to be finished overhead, so more weight can be handled in the range of motion.

There are other ways to develop power that do not have to do with the Weightlifting movements. I like to use squat jumps, variations of box jumps, reaction drills, med ball exercises, and more. The trick is to…well, there really is no trick. Just be sure that the movement is quick and performed with good technique (i.e., not sloppy, where energy is leaking all over the place). You can also play around with how much you load the movement. Sometimes the training effects are better with slightly more or less load.

Many sports require power development; even marathons. It’s true. Each ground contact and subsequent push-off requires a small stretch-shortening of the ankle plantar flexors (gastroc and soleus), which require a small amount of power. We would simply call this power-endurance, or the ability to generate small amounts of power very frequently over a large period of time.

Other sports require the typical short bursts of force that we all think of as power. Short sprints in football or soccer; lifting a heavy bar overhead in less the 1 second in Weightlifting; throws on a mat in Judo. These are all typical representations of power. The most important thing to consider when trying to transfer qualities developed in the gym to the sport is the time actually allotted for the expression of force in that sport.

A defensive lineman has maybe 1-2 seconds (I’m guessing, by the way) to display force against his opponent at the line. This is not enough time to develop maximal force, so here is where power training becomes crucial. Yes, he may be able to squat the house, but a maximal squat may take him 4-5 seconds to complete. Not fast enough. Here is where you may want to play around with movements and load for optimum dynamic correspondence (a term coined for transferring ability to the sport).

Stay tuned for the next installment….

The ideas, comments and materials presented herein are solely those of the author and do not necessarily reflect the NSCA’s official position on an issue. The NSCA assumes no responsibility for any statements made by authors, whether as fact, opinion or otherwise.

One thought on “What Every Strength Coach Should Know: Developing Power”